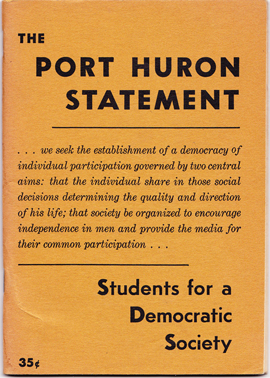 “The genius of the Port Huron Statement, as it was structured, was placing its declaration of values up front. The movement would not be guided by interests but by values. It would not despise interests but it would insist that human life deserved to be less cruel and more lovely . . .

“The movement’s idea was not utopian. Values were the starting point. They were not other-worldly. They were this-worldly. . . . SDS insisted that the people had to consent to their government, but more than consent—they should become a people, held together by what was best and most decent in them.

“There was a penetrating hope that breathed between the lines of this remarkable document.”   —Todd Gitlin [2], April 12, 2012

As we were strolling through Washington Square Park Thursday evening we saw a light shining from the south, from the NYU library at 70 Washington Square South, and, behold, the brightness was the Tamiment Library [3] & Robert F. Wagner Labor Archives on the tenth floor.

We followed the light and found a gathering of luminaries to commemorate the fiftieth anniversary of the Port Huron Statement, featuring Tom Hayden [4], Todd Gitlin [5], Robb Burlage, and Martha Prescod Norman Noonan (Students for a Democratic Society [6]) as speakers. In the audience sitting among the ordinary folks like us were history-making New Left activists and organizers you may not have heard of, such as Alan Haber [7], the first president of SDS, and Charles McDew [8] of SNCC, but their work in the civil rights, free speech, anti-war, and anti-poverty movements changed—that is, made more humane and more democratic—the world we live in today. In many cases, they also risked their very lives.

Briefly, the Port Huron Statement [9] (1962) was a sort of mimeographed mission statement of the Students for a Democratic Society: a new generation’s call for participatory democracy; an assertion of humane, liberal values; and a critique of the Cold War mentality and the military-industrial complex that were strangling civic action and imagination and diverting precious resources from social needs such as ending racism and poverty. It marked a break from the old left that was anxious to prove itself anti-communist after the ravages of McCarthyism. 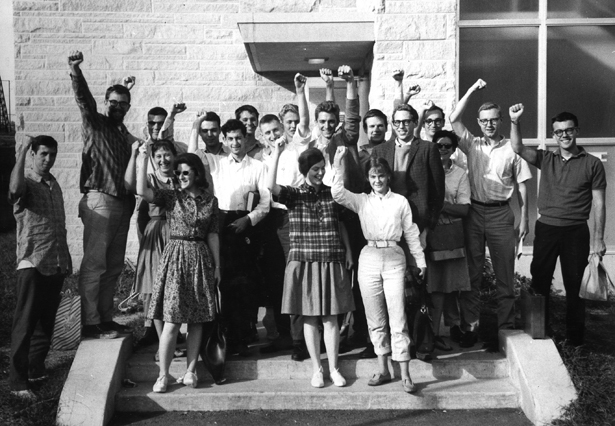 Roadmap to the 1960s, blueprint for a generation

SDS, a student division of the League for Industrial Democracy, was founded at the University of Michigan in Ann Arbor in 1960. The Port Huron Statement, initially drafted by Tom Hayden—22 years old at the time—and elaborated through discussion among fellow SDS members, was adopted at the first SDS annual convention of about 60 members on June 11–15, 1962, at the AFL-CIO’s camp in Port Huron, about 100 miles NE of Ann Arbor, near Detroit.

The statement, intended to be a living document, guided a generation until, with racial and Vietnam War tensions escalating, around 1967 and 1968, younger activists found it not radical enough. Many of SDS’s ideas, values, and methods, however, live on in the energy and activism of the Occupy [11] movement, the Arab spring, and the Wisconsin [12] public workers’ struggle. We are confident that, like the Declaration of Independence, it will be commemorated on its one-hundredth anniversary, too, and well beyond, as long as there is a United States of America. 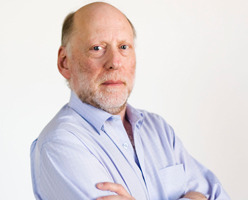 [13]We will have more to say in the next few days about the remarks of Tom Hayden and others on the fiftieth anniversary of the historic Statement, but we begin our commemoration by sharing the eloquent remarks of Todd Gitlin [13], who was kind enough to give us a copy. A cultural historian and professor of journalism and sociology at Columbia University, Mr. Gitlin is perhaps best known for his bestselling book The Sixties: Years of Hope, Days of Rage [14]. He was president of SDS in 1964 and 1965 and helped organize the first national demonstration against the Vietnam War, in 1965. His remarks Thursday night were energetic and charged with an intimate sense of the beauty and love and also frustration and tragedy that characterized the experience of the 1960s and afterward.

On the Port Huron Statement

The Port Huron Statement was the clearest, most vivid and energetic articulation of an awakening: one of those great uprisings that are the crucibles of America struggling (against much violence and cruelty) to become itself—a commonwealth of free association and mutual aid.

The New Left wanted to make, out of the lonely crowd, the beloved community—the kernel of a moral awakening that would put intelligence to work in behalf of transcendent values and overcome as much human ugliness as possible.

This beloved community would be bound together in what Carl Oglesby would later call “brute love”—an association of free and struggling individuals joining together what an earlier president, Abraham Lincoln, called “the better angels of our nature.”

Brute love was distilled from a fierce chemical reaction (and I’m not just referring to controlled substances) which began with a revolt against racist evil and stupefaction, and developed into an intoxication with the vivid solidarities that are made possible, though never guaranteed, by democratic life.

The intoxication was stirred by a discovery of the bonds that could be forged from a conviction that big changes were not only necessary but possible.

The sense of necessity was both moral and intellectual. It’s interesting: There are not, in the Port Huron Statement, extraordinary insights into the crimes and failure and inequities of American society at the outset of the 1960s:

• the military-industrial contempt for human possibility;

• the grotesque brandishing of thermonuclear weapons in the Cold War;

• the triumph of empty labor; and so on.

[15]The keen insight of the Port Huron Statement was that a life of shared value mattered—and that it could be lived in common—and that citizenship might matter and might, for some body of people, be practical. The name that was affixed to that insight was “participatory democracy.”

It was, I think, intended more as a principle of social life than as a way of holding meetings. It was not understood as an alternative to strategy or to the collective work of intellect, but as their fruition.

The genius of the Port Huron Statement, as it was structured, was placing its declaration of values up front. The movement would not be guided by interests but by values. It would not despise interests but it would insist that human life deserved to be less cruel and more lovely. The intimation that the world could be remade—starting right now and right here—this was the movement’s idea—all of the movement, as Linda Gordon points out in her paper, not just the white guys.

SDS insisted that the people had to consent to their government, but more than consent—they should become a people, held together by what was best and most decent in them.

There was a penetrating hope that breathed between the lines of this remarkable document. Within the lines, there were a lot of intellectual puzzles that the Port Huron Statement could not solve. No one has since. They may not be capable of solution. For example: What if most people do not want, at least not so much, to make the decisions at affect their lives? Shall we then disband the people and convene another one?

But the Port Huron Statement did not say: Follow us from Point A to Point Z. It said: Here we are, a bunch of people, “raised in at least modest comfort,” who are going to make the effort to live lives we are not ashamed of, in order to live in a country we are not ashamed of. And that was a very great thing.

At the same time, we are all well aware of what we could not accomplish in the movements of that time. And that is why we ought to be refreshing the language of values, and reawakening the awakening, and acquainting and reacquainting ourselves with our better angels.

I mean not just ourselves, the core of a movement and its passions. I mean also the vast outer movement. Just as there was a conspicuous ’60s, the one recorded in the photogenic confrontations and iconic images of courage and horror, there was also a subterranean ’60s—less well known but just as important. The core American values of the New Left ignited many millions of people who did not necessarily subscribe to the movement’s very doctrine and whim and style. Around kitchen tables and in their private nights they went beyond asking: What should the world be? They asked themselves, and asked each other: What should I do?

That subterranean movement, I suspect, is again or still, at work among us. So too is the aboveground movement, reawakening the awakening, reminding ourselves of our better angels.

Today’s Occupy movement, I think, holds open the promise of a renewal, another great awakening, that moves us further along the long and winding road toward a more respectful and less cruel society, one which conserves the earth (and is therefore in an honest sense “conservative”) and takes seriously, again, the inalienable rights of life, liberty, and the pursuit of happiness.

[16]Todd Gitlin is the author of many books [17]. His latest, Occupy Nation: The Roots, the Spirit, and the Promise of Occupy Wall Street [18], will be published in August by !t books, a division of HarperCollins. It will be available as a Kindle ebook [19] in May.

The Port Huron Statement was typed and mimeographed by some of the people, now in their sixties and seventies, who were in attendance Thursday night. The first mimeographed printing, in August 1962, was of 20,000 copies; the second printing, of 20,000 copies, was in December 1964. Copies sold for thirty-five cents each. It is now a paperback published (2005) by Thunder’s Mouth Press, a good deal [20] at $14.95.