[1]In response to our recent post [2] about Christian fundamentalists’ unconcern with the present danger of global warming, our good friend David in Berkeley, a former editor at Sierra Club Books, had this to say:

I’ve been wanting to tell the rapturists et al.: Maybe the tornadoes, hurricanes and flooding in places they didn’t use to happen—and the fact that they’re ten times worse than usual—is god’s way of yelling, screaming, and shaking his fists at you that climate change is real. Duh!

P.S. And for you true believers in Oklahoma: Maybe god’s also letting you know what he thinks about your voting for James Inhofe! D’oh!

James Mountain Inhofe (R-OK), of course, is the ranking Republican member of the Senate Committee on Environment [3] and Public Works who has called global warming “the greatest hoax [4] ever perpetrated on the American people.”

David also sent along a link to a fine Washington Post op-ed by Bill McKibben [5] (author of The End of Nature), “A Link Between Climate Change and Joplin Tornadoes? Never! [6]”

We agree entirely, and so might many who are freaked out by the terrifying tornadoes that ripped through Joplin, Missouri [7], and north of Minneapolis on Sunday, and through central Oklahoma [8] on Tuesday, and in Alabama [9] in April. Verily, it is like unto a plague of extreme weather. There have been so many tornadoes and super-tornadoes this year it’s become impossible to remember them all. (Oh, and then there’s the recent/current Mississippi River flooding [10] caused by excessive rainfall in April.) The New York Times reports about Joplin: “More than 116 people were killed in a tornado outbreak on May 22, bringing the year’s total to over 480 and making it the deadliest year since 1953, when 519 people were killed.” (See list of disaster aid organizations [11] below.)

Andrew C. Revkin of the Times reports in “Tornado Outbreak Possible in Kansas and Oklahoma [12]” that the  Storm Prediction Center of the National Weather Service “has issued a blunt warning to Kansas and Oklahoma and adjacent regions to be prepared for the worst on Tuesday.”

Revkin adds [12] that the 2011 hurricane season begins June 1. The National Oceanic and Atmospheric Administration (NOAA) is warning that the hurricane season in the Atlantic Ocean should be more intense than normal. Further, NOAA warns [13], “Sea surface temperatures where storms often develop and move across the Atlantic are up to two degrees Fahrenheit warmer-than-average.”

But back to David’s point about extreme weather events in places where they didn’t used to happen, we recall quite vividly the freakish tornado storm [14] that unleashed micro-bursts of tree-toppling winds [15] of 60 to 80 m.p.h. in Queens and Brooklyn in Sept. 16, 2010. New York City is not anywhere near Tornado Alley (Oklahoma and Kansas). Not normally.

And yet the fervent faithful may still prefer to believe—as Jerry Falwell and Pat Robertson have so often warned—that natural disasters are signs of God’s wrath about abortions or the “homosexual agenda” and so on. (“Still a man hears what he wants to hear and disregards the rest . . . la la la . . .” ) 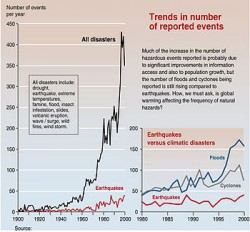 [16]The correlation between global warming and extreme weather is almost never simple and clear-cut, but it is demonstrable, and intensifying. It is known, for example, that warmer sea waters fuel more intense hurricanes. Global warming does not necessarily “cause” more hurricanes, but increases the likelihood that those that do arise will be more ferocious. Such was the case with Hurricane Katrina.

For a few accounts of the relationship between climate change and increasing frequency and intensity of hurricanes, heat waves, droughts, floods, and even allergies, check out these sources from the Environmental Defense Fund [17], the National Wildlife Federation [18], and these Wikipedia articles on effects of global warming [19] and extreme weather [16].

For science-based reporting and commentary on climate change we recommend Andrew Revkin, a science and environment writer for the New York Times who blogs at DotEarth [20] (NYT). We also highly recommend Elizabeth Kolbert’s excellent Field Notes from a Catastrophe: Man, Nature, and Climate Change [21] and her excellent reporting [22] on climate and environment for The New Yorker. See for example “Uncomfortable Climate [23]” on what the new Republican majority in the House of Representatives means for the earth’s climate.

[24]The May 2011 calendar of the House Committee on Energy and Commerce, which deals with—or ignores—environmental matters, is absolutely blank.

In “Uncomfortable Climate [23],” Elizabeth Kolbert quotes John Boehner, now House Speaker, as having said to ABC’s George Stephanopoulos, “The idea that carbon dioxide is a carcinogen, that it is harmful to our environment, is almost comical.” At the time of the article, one of the contenders for the chairmanship of the House Committee on Energy and Commerce was John Shimkus of Illinois. “At a congressional hearing in 2009, he dismissed the dangers of climate change by quoting Genesis 8:22: ‘As long as the earth endures, seedtime and harvest, cold and heat, summer and winter, day and night will never cease.’ He added, ‘I believe that’s the infallible word of God, and that’s the way it’s going to be for His creation.’ Today, May 24, under “What We’re Working On,” he tweets on the House Energy and Commerce a passage from Matthew 8:12: “Jesus said, ‘I am the light of the world . . .’” File under God Help Us.

To be sure, even before the midterm elections, the prospects for meaningful action on climate change in Washington were dim. In June of 2009, the House approved the American Clean Energy and Security Act, also known as the Waxman-Markey bill, which would have imposed a nationwide cap on emissions. The bill was convoluted in all the usual, special-interest-driven ways, and not nearly ambitious enough to produce the emissions cuts that are needed. Even so, Waxman-Markey was too demanding for the Senate. After months of posturing and further concession-making, Senate Democrats failed to come up with a bill that they were willing to bring to the floor. While the Senate dithered, President Obama was silent. He did nothing to rally public opinion on the issue, and what he did do—open up new areas to offshore oil drilling, for example—only undermined the negotiations.

Meanwhile, as John Boehner chortles about the dangers of CO2, the world keeps heating up. According to the National Oceanic and Atmospheric Administration, the first half of 2010 was the warmest January to July on record. And this is just the beginning. Owing to the inertia of the climate system, the warming that we’re experiencing is only a fraction of the temperature increase that’s already guaranteed.

Indeed, a Scientific American headline from March—“House Repubs Vote That Earth Is Not Warming [25]”—summed up the party’s vision, and pretty much the entirety of congressional action we can expect from them on this issue.

“Death Panels” Are Real . . . and Democrats Ain’t Helpin’, Neither

To be brief and blunt, the only way—the only way—the United States will ever move seriously to mitigate the dangerous climate catastrophe that is already well under way is by electing no more Republicans to any office whatsoever. Down to their DNA, they are constitutionally averse to taking environmental matters seriously if they have the least impact on corporate earnings. A vote for Republicans is a vote for more extreme weather, more denial of reality.

Even more immediately, it’s a vote for denial of emergency relief. No. 2 House Republican Eric Cantor says [26] that the federal government cannot afford disaster relief for tornado, flood, and hurricane victims unless it finds comparable savings (“offsets”) elsewhere in the budget. Similarly, on May 11 Mississippi Gov. Haley Barbour notified [27] his citizens that they were on their own against the floodwaters of the Mississippi River.

Furthermore, Democrats—except for some admirable exceptions like congressmen Ed Markey (Mass.), Henry Waxman (Calif.), and Senator Barbara Boxer—have to be badgered and whipped repeatedly to press for environment-protecting legislation. President Obama, too, must be pressed upon to fulfill campaign pledges [28] to protect the earth. The Los Angeles Times opined in a tough editorial [29] that “the environment and public health will be thrown under a bus for the sake of his reelection in 2012.” See Grist’s good summary of the LAT editorial here [30]. Obama’s regrettable appointment of Ken Salazar as Interior secretary and his opening of offshore oil drilling—just weeks before the BP Earth Day oil blowout [31]in April 2010—show a lack of environmental seriousness and continue a too-corporate-friendly way of doing business. See Rolling Stone political writer Tim Dickinson’s powerful article, “The Spill, The Scandal and the President [32]” (June 8, 2010).

We are not comforted by Congressman Shimkus’s quotation of Genesis, “As long as the earth endures, seedtime and harvest, cold and heat, summer and winter, day and night will never cease.” What guarantees that the earth will endure? And what extremes of “cold and heat,” etc.?

Top photograph by Patrick Fallon for the New York Times, captioned “Sara Thomas and her fiancé, Jimmy Baker, worried about the fate of the four children of some neighbors whose home was reduced to debris.” Bottom photo of tornado destruction by Larry W. Smith / European Pressphoto Agency, captioned “The remains of homes in Joplin, population 49,000.” See more photographs here [34].